Several years ago a friend gave me what looked like 4  antique dining chairs that she wanted to get rid of.  They still seemed pretty sturdy but definitely needed a little bit of a makeover.  The cushions were pretty grungy and needed immediate removal.  Which I did.  (Wish I had a picture of what they looked like) And then those cute little chairs sat in my garage for several years.  I had every intention of finishing them but I just never got around to it.  Plus I think I was a little afraid.  I’d never redone chairs before and although it didn’t look like it would be too hard, I didn’t want to do the wrong thing.  My husband threatened to get rid of them if I wasn’t going to do anything with them.  He was getting tired of them taking up space in the garage.  I promised that I would get them done within 4 months just don’t get rid of them yet.  Another few years passed and still I let them sit there. Finally, several years ago I decided to jump in and get them done.  It wasn’t that hard.  A lot of elbow grease and voila!  I finished one of them and it turned out pretty well.  But that was it.  The other three continued to sit there for another few years.  Finally, FINALLY, last week I determined that I would finish those chairs by the end of the week.  I pushed through to get them done and in the end it only took me a couple days!  What was I so hesitant about?

I love to find a story behind things like this so after finding a sticker on the bottom from Tell City Chair Company, I did a little research.  The Tell City Chair Company was founded in 1865 in southwest Indiana.  It made nothing but chairs for 80 years.  After 146 years in business, the company closed it’s doors in 2011.  As far as I can tell, my little chairs are from the 1930’s – 1940’s.

So, once I got down to it, this project was pretty easy.  The finish had become tacky and grimy to the touch. To clean them up I used 0000 steel wool (super fine) to sand down the grit.  In a few spots I ended up using a really fine sand paper.  This resulted in a nice smooth finish although it did leave the color looking a bit mottled in places.  I wasn’t sure if I could even out the look without restaining which I didn’t want to do. 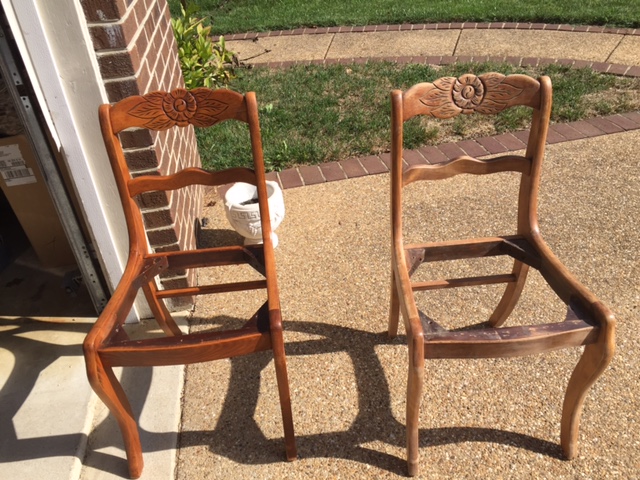 Once I had it all smoothed out, I rubbed the whole chair down with boiled linseed oil.  The result was beautiful.  It just gave life back to the wood.  The mottled look disappeared and the beautiful wood tones came through with a smooth satin touch. 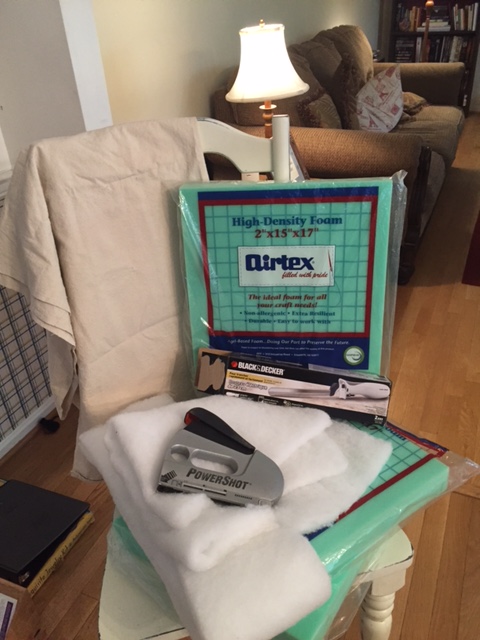 Now that I had the finish cleaned up and restored, I had to decide on the cushion.  I decided to keep it simple and use a linen look.  Actually I used a drop cloth from Home Depot.  I used four chair cushion pads I bought from JoAnn’s, topped them with some batting and then covered the whole stack with the drop cloth cut to fit around the whole thing.  Pulling it tight and stapling it on the bottom of the wood seat made a perfect cushion for the chairs.

Now where to put these cute gems.  At last this project is done!  Time to move on to another one!